By Donna Hull on 2014/04/03
This article may contain referral links. Read our Disclosure. 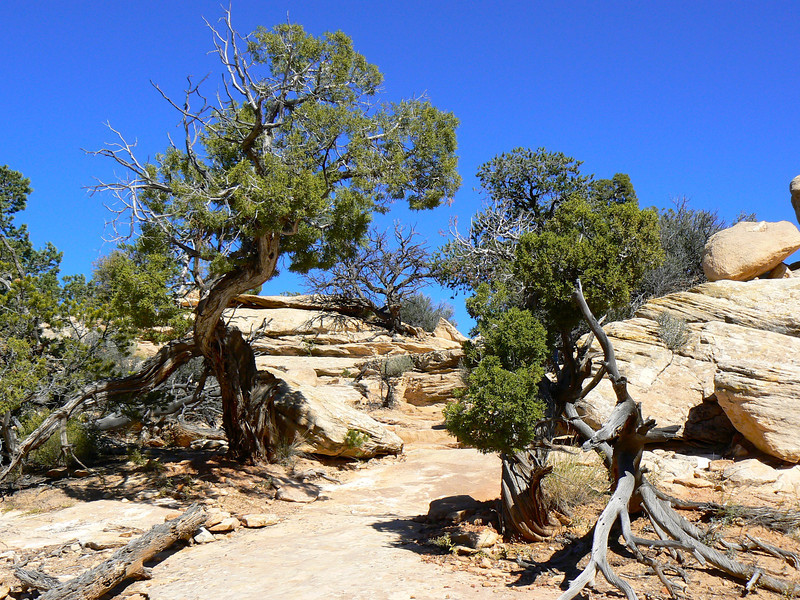 To say that Natural Bridges National Monument is off-the-beaten-path is an understatement. Located on the Colorado Plateau in southeastern Utah, Natural Bridges is approximately 35 miles west of Blanding, which probably isn’t telling you much. Look up Utah Canyon Country or The Four Corners on a map and for a better perspective.

Natural Bridges is accessible by automobile, or perhaps a bike. The usual route is to drive west on Highway 95 out of Blanding, before turning onto Highway 275 which dead ends at the monument. To reinforce the idea that this part of the country is isolated, there is no cell service. State Route 95 didn’t even exist until the uranium boom of the 1950’s. And the road wasn’t paved until 1976. During the early part of this century, visitors rode 3 days on horseback from Blanding to reach the national monument. Now that’s off-the-beaten-path!

Of course Alan and I never arrive the easy way. We chose to cut across the Colorado Plateau on Butler Wash Road, a dirt track that parallels Comb Ridge between Highway 163 out of Bluff and Highway 95. The area is filled with
Anasazi ruins if you know where to look. Exploring in more detail is on our boomer to do list for another trip.

Sipapu Bridge is named after a Hopi phrase that means “place of emergence”.

The scenic loop drive at Natural Bridges National Monument takes about an hour, but you’ll want to include time for exploring each of the three bridges so plan to spend a least half a day. A steep trail winds down the canyon to the first bridge, Sipapu. My fear of heights kicked in when I learned that climbing down ladders was part of the journey so Alan and I enjoyed the view from the overlook.

The Owachomo Bridge is a Hopi phrase meaning “rock mound”.

It was the same story at the next bridge, Kachina. But, by the third bridge, Owachomo, I found the trail manageable so Alan and I took the path that delivered us directly underneath the bridge. 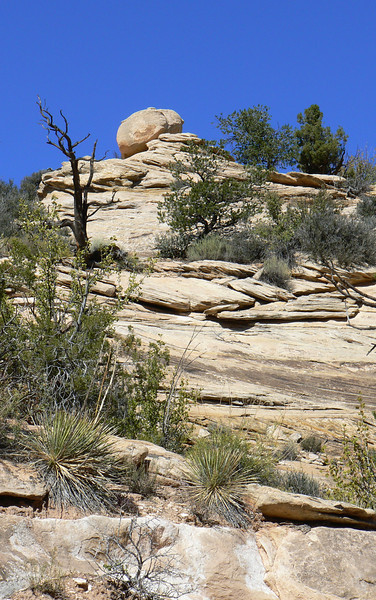 Nature’s in charge of the sculpture at Natural Bridges Monument.

Although you might not have heard about Natural Bridges, Theodore Roosevelt named the area as a national monument in 1908 after National Geographic Magazine wrote about the land bridges in a 1904 article. On March 6, 2007, International Dark-Sky Association named Natural Bridges Monument as the first International Dark Sky Park. It’s known for the river of light that’s created when the Milky Way rises over Owachomo Bridge.

For an interesting drive back to Bluff, we continued on Highway 95 to State Route 261 that crosses Cedar Mesa. Moki Dugway, a dirt road worthy of a thrill ride travels down from Cedar Mesa and back to Highway 163 and Bluff. Lodging options include area campgrounds, Valley of the Gods Bed and Breakfast or Desert Rose Inn & Cabins in Bluff.

Planning a trip to Utah? Take a look at our Utah Travel Resources.

Have you visited Natural Bridges National Monument? Did you hike to Sipapu or Kachina bridges? Join the conversation at the My Itchy Travel Feet page on Facebook or send us an email.

A boomer travel and lifestyle authority who is exploring the world one activity at a time. Besides writing and publishing My Itchy Travel Feet, she is also the author of New Mexico Backroads Weekend Adventure and Coloring the West, An Adult Coloring Book for Travelers
View all posts by Donna Hull →