Madikwe Hills Private Game Lodge is located in Madikwe Game Reserve, part of South Africa’s North West Province near the Botswana border. Created in 1991 to stimulate the area’s economy plus conserve the land, 8200 animals were relocated to the malaria-free zone consisting of plains bordered by rocking outcroppings and mountains.

When Alan and I arrived at Madikwe Hills Private Game Lodge, we had to look twice. Where was it?

Perched on a hillside among boulders and Tamoti trees, the South African luxury lodge seems to melt into its surroundings. Wooden walkways that weave around boulders and through the trees connect ten suites to the main lodge where dinner is served on a dining table set with china and crystal. Nature combined with luxury is our kind of boomer adventure.

During our stay at Madikwe Hills Private Game Lodge, Alan and I enjoyed a suite that literally rambled through the rocks. No. 6 had a living area with fireplace and a large bedroom that looked out onto a private plunge pool. A flight of steps led from the dressing area to a bath with a shower carved into a boulder. Beyond the glass door, another patio contained an outdoor shower and tub for bathing with a view.

Although game drives dominated the day, food was a close second with meals rivaling any fine restaurant. And the final touch? On the last night, we returned from the game drive to find flickering candles lining the staircase to the claw-foot tub where a hot bubble bath waited. I like ending my day’s adventure with soothing luxury. How about you?

While at Madikwe, we watched a female lion stalk a wildebeest, followed an elephant herd, listened to the roar of a lion claiming his territory and learned the importance of dung beetles from our ranger, Jaco. The area is known for wild dog sightings but unfortunately, they remained illusive during our time here.

Isn’t this baby elephant a cutie? “Wait for me, Mom” the baby elephant seems to say, rushing to follow her across a dusty road in South Africa.

During one of the game drives , our Range Rover came across a herd of elephants. Guide, Jaco, stopped the vehicle with plenty of distance between us and the elephants lumbering in a long line across the road.

If you think elephants look huge in a photo, you should see them in person! Alan and I appreciated the respect—and distance—Jaco gave the elephants. According to Jaco, (did you see our post about the bug man?), you don’t want to be charged by one, especially a mother protecting her baby elephant.

Jaco turned off the Range Rover’s engine. Alan and I took photo after photo as we waited for the elephants to walk on by. Waiting and photographing—the motto of a safari. 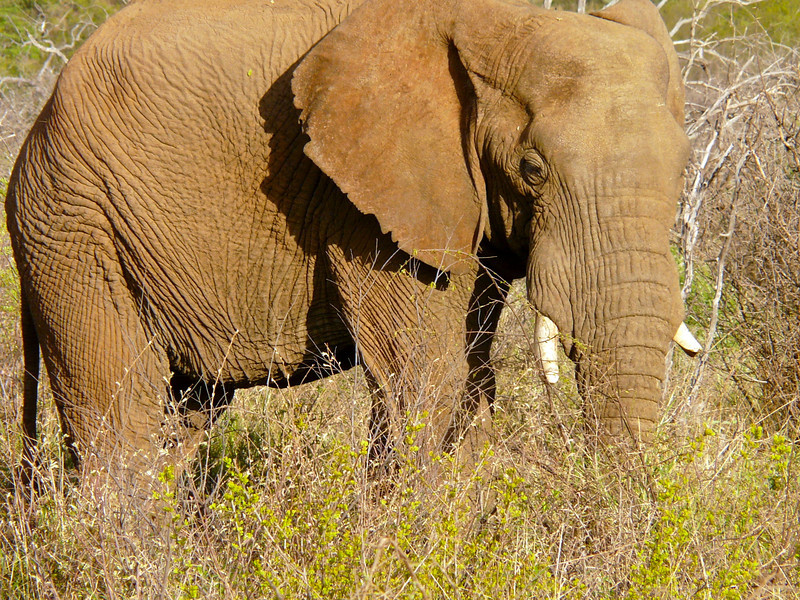 On another morning game drive, Jaco, stopped at a hillside to point out an elderly male elephant with a bedraggled ear and one broken tusk roaming in solitude. He looked tired and lonely.

A safari is an opportunity to observe wild animals in their environment. The pace alternates between sitting patiently waiting for something to happen and a frenzied rush to reach a special sighting radioed in by another ranger. In this case, we simply sat and watched an elderly elephant moving slowly through the grass waiting for the end.

The wildlife watching at Madikwe was outstanding. Of course it helped that Jaco was a knowledgeable and personable guide.

Thinking about planning an African safari? Check out all the information on our complete Safari Page a great resource for active boomer travels in Africa!