By Donna Hull on 2020/01/20
This article may contain referral links. Read our Disclosure.

You’re all probably familiar with the old saying, “a picture is worth a thousand words.” When planning a travel itinerary that saying is definitely true. Our Southern Italy photos document a twelve-day Southern Italy road trip that remains a favorite for Alan and me.

Claudia Fontana from Italy A La Carte met us at the Hilton Rome Airport for the drive to southern Italy, then dropped us off 12 days later at our cruise ship in Civitavecchia. We had previously used his travel services on a road trip in Northern Italy.

Claudio plans the itinerary, we approve it; he provides a list of lodging, we choose our favorites. For an up front fee that is all-inclusive, Claudio makes the arrangements as well as drives, interprets, guides and tells us what to eat during our Italian road trips. It’s the perfect combination.

If you’re planning a trip, follow this Southern Italy photo itinerary to discover destinations to add to your want to see list. It’s twelve days of authentic travel in a less-crowded, not-so-touristy part of Italy.

The first week of this Italian adventure included driving from Rome to the Adriatic Coast. We stopped in charming mountain villages and explored off-the-beaten-path coastal towns. Taking a helicopter to explore the Tremiti Islands was definitely a highlight. 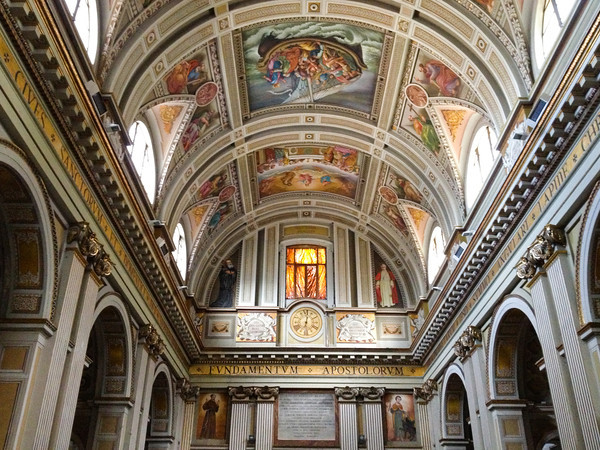 Basilica Sant Andrea was a delightful surprise in Subiaco

On the way from Rome to the Adriatic Cost—where the real Southern Italy road trip begins—we stopped at the lovely hilltop town of Subiaco. Claudio led us down cobblestone streets to explore this charming, small town. Lucrezia Borgia, daughter of Pope Alexander VI, grew up in the castle located at the top of the hill in Subiaco. There’s also a lovely ceiling in Basilica Sant Andrea to see and photograph.

Exploring Capracotta in the Apeninnes You’ll find this rock at Capricotta on a drive in Italy’s Apennine Mountains.

On a scenic road trip through the Apennines, we stopped at Capracotta, translated to mean Cooked Goat. Alan says he’s coming back to this small village located high in the Italian mountains.

Finding the Greek Isles in Peschichi The white city of Peschici sits on the Adriatic coast of Italy.

After making it to the Adriatic Coast, the scenes from our walking tour of Peschici reminded us of the white-washed buildings in Santorini. Although the architecture resembles buildings found on the Greek Islands, this area of Italy was settled by Slavic peoples from the Dalmatian Coast. Today, it’s a summer playground for Germans and Russians.

Walking and eating in Viesti It was a long, uphill walk to reach the church in Viesti.

In Viesti, Alan and I walked up and up through winding cobblestone streets until we finally reached the church. Although it was closed, the view overlooking the Adriatic was worth the effort. Later we enjoyed a delicious lunch where Claudio interpreted every single item on the menu, then advised on the dishes that we should try. Alan sits behind the Benedictine Abbey on San Nicola in the Tremiti Islands of Italy.

It took a helicopter ride, followed by a short boat trip to reach San Nicola in the Tremiti Islands, where we explored a Benedictine Abbey dating from the year 1,000. Through the centuries, the island has also been used to imprison many groups of people. Today, the area is a popular Italian getaway.

Are you researching a trip to Italy? Start with our Italy Travel Planning Guide. You’ll find articles, travel resources and even apps to plan your trip to Italy.

Authentic food, small town ambiance and off-the-beaten-path discoveries best describe week two of our visit to Italy’s heel. Alan and I experienced slow travel at its best and can’t wait to return.

Walking with history in Trani Touring Trani put a big smile on our faces.

We couldn’t stop smiling in Trani. Beautiful weather added to a fun weekend of exploring the vibrant harbor area with monuments, restaurants and shopping. A local crowd filled the streets on Saturday and Sunday nights making for great people watching. Italians really know how to dress! Castle del Monte was built by the numbers

Numerology and symbolism played a big part in the construction of Castle Del Monte. Built in the 1200’s, historians are still guessing at Emperor Frederick II’s intentions for the castle, a UNESCO World Heritage Site. It’s an easy day excursion from Trani.

Tasting the food in Locorotondo Locorotondo is a pretty little town with well-kept white buildings where colorful pots of flowers trail from balconies and front porch stoops. But it’s this dish of homemade pasta that will forever remind us of our visit.

Staying in a Trulli house A row of Trulli houses in Alberobello

The stone roofs of the Trulli houses are a unique site in the Alberobello region of Puglia, Italy. We spent the night in one and will be telling you all about it. The beautiful aqua-colored water of a beach in Gallipoli

We couldn’t believe the aqua-colored water on this beach in Gallipoli. On a late October weekend, swimmers and sunbathers enjoyed one last holiday on the Ionian Coast during unusually warm weather. The Sassi settlement in Matera is a UNESCO World Heritage Site.

On a Matera walking tour, we learned that residents once lived in caves built into two valleys. Some still do. We had a fun day exploring the area that is said to resemble Jerusalem. This is also the site where Mel Gibson filmed the movie, The Passion of Christ.

Although our 12-day visit to Italy’s heel ended with Matera, the trip wasn’t done yet. Claudio dropped us at the cruise pier in Civitavecchia where Alan and I boarded Silver Spirit for a cruise from Rome to Ft. Lauderdale. Who wants to fly home when you can cruise across the Atlantic, instead?

There are more photos of Southern Italy to share with you. I’ll add them as time allows.

A boomer travel and lifestyle authority who is exploring the world one activity at a time. Besides writing and publishing My Itchy Travel Feet, she is also the author of New Mexico Backroads Weekend Adventure and Coloring the West, An Adult Coloring Book for Travelers
View all posts by Donna Hull →
Planning a Girls Trip for Baby Boomer Women
Discovering Gdansk On a Self-Guided Walking Tour