There are some places in the world, you should see just once. So it is with St. Helena.

Baby boomer travelers don’t exactly “stop by” in hopes of touring St. Helena. The rocky island fortress, once Napoleon’s prison, sits all alone in the South Atlantic. At the time Alan and I visited, there was no airport, but a fight over one had been brewing. So what brought us to St. Helena? It was one of the few ports on our Regent Navigator cruise between Capetown, South Africa and Rio de  Janeiro, Brazil.

We lucked out with calm seas which allowed the ship to tender passengers to the dock at Jamestown, the one and only town on St. Helena. Skipping the ship’s excursion choices, we tried our luck at hiring a taxi, sharing it with another couple from the ship.

The taxi driver drove an old, black Jaguar that had once been the governor general’s car. Leaving town, the Jag negotiated narrow, steep roads before depositing us near the path to Napoleon’s tomb. The pleasant grassy walk led downhill to the tomb area where a multi-colored flower garden provided a peaceful setting. Only Napoleon isn’t really there. His body was returned to France in 1840. Later, we toured Longwood House, Napoleon’s home on St. Helena. More flower gardens surrounded the nine-room house, which holds memorabilia from Napoleon’s stay. 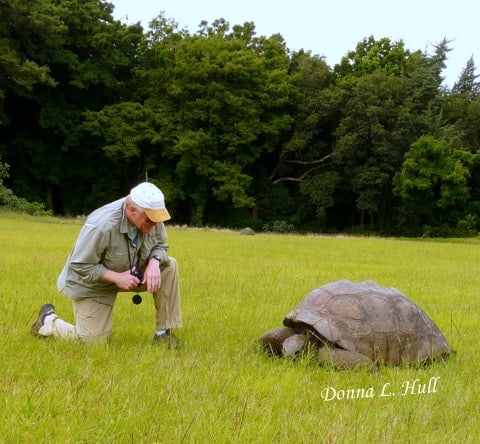 At the Governor General’s home, we made friends with the giant tortoises that roamed the front lawn, before returning to Jamestown. Of course we could have hiked the more than 200 steps up Jacob’s ladder, a steep set of stairs that start in the town, ending at the top of a hill. Our choice? Peeking over the edge from a rest area at the top.

St. Helena turned out to be green, scenic and filled with flowers that belong in a country garden. If your ship travels to St. Helena, take the tender. Tour the countryside. Then, imagine what it’s like to live in an isolated island in the South Atlantic.